Yes very sad.
My dad used to tell me about how good he was.
Top

Remember going to WHL on several occasions when a child watching him play
If Kane is worth over £100m in today's market god knows what JG would have been worth today.
RIP Jimmy
Top

There's not enough hours in the day to list all Greaves' achievements on and off the field, a true goal scorer in every sense, I were upset to learn of his passing. Had his health issues in recent years but still a shock nonetheless. You got to be of a certain age to really appreciate a player or name of such stature, kids today will have next to no idea but for a time at least was the most dangerous forward on the planet. A player of similar mould, Gerd Muller, died recent also.

Participated in the Mexico World Cup Rally of 1970, driving around Europe and South America with his instructor, they finished in a very respectable place out of all contestants. Had some real moments and memories to take from it, Greaves went on record to say it were his finest sporting achievement , surpassing anything he had done of a "football" field.

Some people will say he was 'a player with Tottenham who scored goals' but it were far more than that. Chelsea, Milan in Italy, and a last hurrah with West Ham before retiring, he scored wherever he went and believe scored on debut for every club that signed him. The game back then was harder, tougher, more extreme, so more power to Mr Greaves for his feats and accomplishments.

Probably England's finest goalscorer, it were a real shame he didn't get to play in the Final in '66, on the greatest stage his talents deserved, but picked up an injury in the Group Stages and when fit again Ramsey decided not to include him as Hurst was doing so well in the latter stages. By 1970 he realized he wouldn't play in Mexico / international career was over, and took off the aforementioned Rally. Attacker supreme for clubs and country, the game today is without question poorer for his passing. Ian St John his long-term show host and friend also passed away a year or two back, I'd like to think they're reunited (someplace) if an afterlife exists, getting together once more and sharing tales and experience.

That Spurs team of the early 1960's was superlative, of an age now where you can reel off names like MacKay, White, Dyson, Blanchflower and say Jones although Greaves didn't join until the summer after they had won their last League Championship I think a year before us. Only by reading enough i.e. autobiographies and life publications can you amount the requisite knowledge and feel kind of sympathy for those who never bothered or haven't read but you either get involved or miss out.

So much more you can include but time won't permit it. Hate putting valuations of players of yesterday with today, it often feels improper and misguided but all said and done you'd be looking at something astronomical for Greaves at his prime in 2020 prices. I'd imagine he'd be - or was - as disillusioned as some others as to how prices / fees and salaries have gone off on a ridiculous bullshit tangent since his own time in the game.

A true master of what he set out to achieve, absolute respect to an individual how endured and fought a number of hardships during and after his playing time. Felt a kind of honor to be able to recognize just how proficient such a name was and accomplishments elsewhere. Rest in Peace. 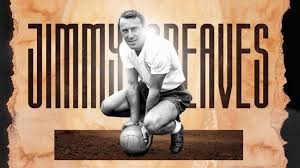 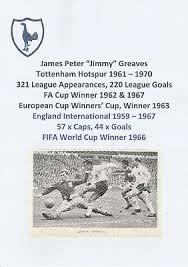 Yes nice words Saint, Was lucky to have seen him play many times, Once he scored 4 against us at WHL ,

think we lost 4-7 that day,
Don't think he ever got over not playing in the 66 World Cup Final, but like a true gent he never held a grudge,

I met him once under strange circumstances , was driving down this country lane when this fella and dog walked out in front of me, I braked just in time to not run him over, when this fella looked up it was a very shaken Jimmy Greaves. and his dog didn't look to impressed either,

saw him again in the local petrol station, was chatting and joking with everyone, came across a real gent, RIP Jimmy, and condolences to all his family and friends,
Top

What was strange about this is Greavsie had health issues for decades and Saint would always ask him how things were going with his health, actually on the S&G show.
“Aw saint, i tell ya, there were tubes in every orifice” ……, is one i remember…..

More bad news. Roger Hunt died a few hours ago also after a lengthy illness, he were 83 years of age. Another member of the English 1966 World Cup team, he featured in every game of that tournament scoring three on route to victory.

Fans of a certain age will recall (Hunt) being a great goalscorer at Anfield in the 1960s. Scored nearly 250 goals for domestic level and only Rush, Fowler, possibly Owen came close to breaking it. Its a real shame a number of these standout players from yesteryear are being lost with what seems now so regularly.

Sad day for Liverpool, he were a club legend and scored more goals for them many wouldn't believe. Tomorrow I believe is the 40 year anniversary of Bill Shanklys passing also, respects to both figures and their surviving families.
Top
Post Reply
9 posts • Page 1 of 1