They are now the only British team in the competition, with Middlesbrough crashing out.

Wolves, represented by one of their professional FIFA players, will now take on Standard Liege as they seek their place in the final of the virtual tournament - in aid of charity.

FC Groningen or Istanbul Basaksehir will await the winners in the final - with both semi-final ties yet to be scheduled.

Diogo Jota swapped his boots for his PS4 controller this weekend and earned derby bragging rights after a thrilling 5-3 FIFA 20 win over Aston Villa’s Ezri Konsa.

Raul Jimenez scored four in the FIFA 20 charity match (AMA)
Wolves were due to visit Villa Park in the Premier League at 12.30pm this afternoon before the COVID-19 pandemic led to the postponement of all English football.

But the fixture still took place on FIFA 20 at the same time, as Jota and Konsa went head-to-head, in support of Acorns Children’s Hospice.

Jota was indebted to strike partner Raul Jimenez who scored four of Wolves' five goals in the game before Villa's late comeback proved in vain.


Wolves eSports
@WolvesEsports
The final score is in! @DiogoJota18 secures the win for @Wolves ending the game in a total score of 3-5

Gg to @Ekonsa15 and @AVFCOfficial

But overall a very entertaining game for the charity of @AcornsHospice

View image on Twitter
518
1:24 PM - Apr 4, 2020
Twitter Ads info and privacy
73 people are talking about this
"Wolves against Aston Villa is a fixture I love playing in, with the passion from our fans, and now hopefully this will give them something to get excited about whilst the real games are on hold," said the Portuguese international.

The entire match was given the live commentary experience with Wolves' own radio-king Mikey Burrows at the helm.

Jota himself was on the scoresheet to make it 4-1 to the visitors before Villa replied through Mbwana Samatta and Wesley.

Wolves have been playing games on FIFA 20 in place of their normal Premier League fixtures since the league's suspension - with their dedicated eSports team featuring in those encounters.

This was the first time the club's eSports team will be represented by a first-team player. 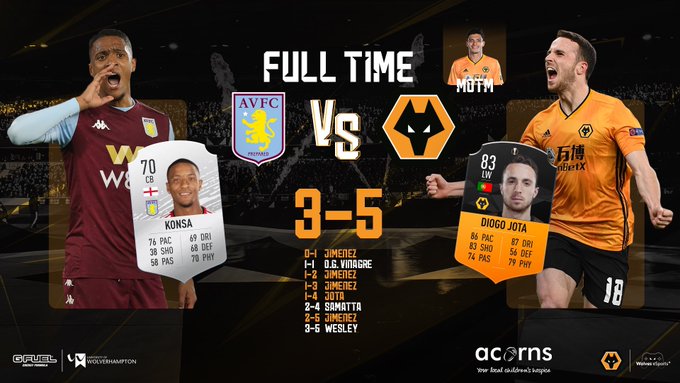 Beating Aston “the vile” Villa in the quarters will have been satisfying!

beating them at anything is great,

they have certainly fallen of there imaginary perch,
Top

Wolves have been crowned FIFA 20 Ultimate QuaranTeam champions after a thrilling 2-1 win over FC Groningen.

Goals from Raul Jimenez and a late strike from Joao Moutinho were enough to see Wolves win the 128-team virtual tournament. 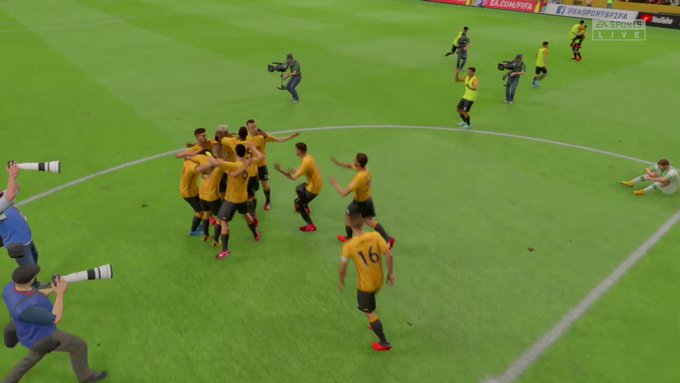 Data decides Wolves would be winners over Arsenal

Statistics dictate Wanderers have the edge over Arsenal.

Second-half goals from Adama Traore and Raul Jimenez helped Wolves come from behind to claim a 2-1 win over Arsenal in a Premier League fixture where the outcome was predicted based on data from the PA news agency.

Wolves would have welcomed Arsenal on Easter Monday had the coronavirus not led to an indefinite suspension to football in this country and PA’s mathematical modelling shows the hosts would have prevailed.
Five of the seven goals Arsenal have scored against top-half opposition came in the first half so it was therefore little surprise Gabriel Martinelli gave the Gunners a 36th-minute lead.

n seven of the eight times he has netted this season, Martinelli has scored Arsenal’s opening goal so this would have continued a welcome habit for the young Brazilian.
That would have left Wolves trailing at half-time although Nuno Espirito Santo is well-versed in these types of team talks as his side had been behind at the interval in 10 of their previous 14 matches against top-half opposition.

Not once have Wolves been ahead at the halfway point against a top-10 side this season while they have only opened the scoring on one occasion, but they have also never lost the second half at home in the league in 2019/20.
It took only six minutes for Wolves to draw level through Traore, who continued his knack of scoring in big games, having found the net on three occasions against Manchester City and once versus Tottenham, all in the second half.

Arsenal have been guilty of some reckless challenges in the box this season and David Luiz conceded his fourth – and the Gunners’ seventh – penalty of the season with a clumsy foul on the irrepressible Traore in the 68th minute.
Up stepped Jimenez, who made no mistake from the spot. Of his 13 previous top-flight goals scored in this campaign, all but one have come after the break.

And it was the Mexican who had the final word once again, with eight of his 14 top-flight goals now proving to be the last of the game, as Wolves clung on to secure a vital three points – theoretically.
Top


Diogo Jota and John McGinn have been selected to represent Wolves and Aston Villa in the inaugural ePremier League Invitational tournament.

The duo will each play as their respective teams on the immensely popular FIFA 20 video game, with games in the knockout tournament being broadcast online.

The competition pits top flight footballers against one another, with the final taking place on April 25 - shown live on Sky Sports.

Jota has represented Wolves previously against Villa last month, when he beat Ezri Konsa in a game set-up for charity in place of the original Premier League fixture which was due to take place at Villa Park.

The online competition's prize fund will be donated to the #PlayersTogether initiative, which was created by Premier League players as a collective way of generating funds for the NHS.

McGinn and Jota are part of a star studded cast of players announced so far, with Raheem Sterling, Wilfried Zaha and Trent Alexander-Arnold amongst the players for other clubs.

The full complement of top flight stars will be confirmed on Monday April 20 ahead of the opening draw. Games will take place from Tuesday until Friday. The semi-finals and final will be broadcast live on Sky on Saturday April 25.

Wolves are through into the next round of the ePremier League Invitational FIFA 20 tournament, after Diogo Jota got the best of Leicester City midfielder Wilfried Ndidi 8-2. 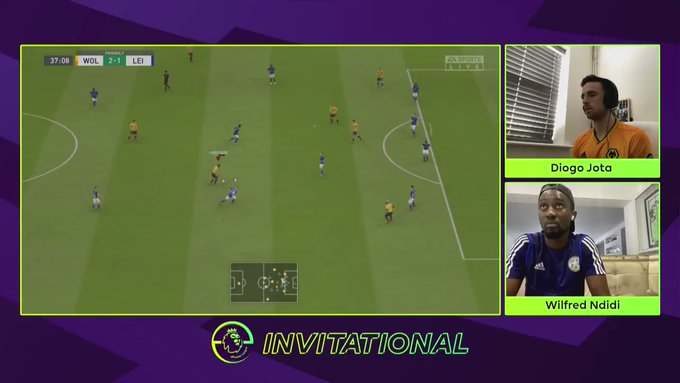 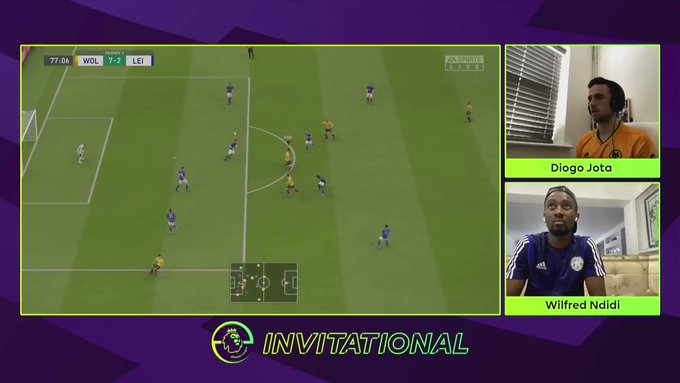 Jota put in a dominant performance throughout the encounter, seeing him earn his way into the next round, after receiving a bye through the opening fixtures.

The ePremier League Invitational has been set-up, pitting professional footballers against one another alongside a selection of celebrity fans, to raise money for the #PlayersTogether initiative, which was created by Premier League players as a collective way of generating funds for the NHS.

The Wolves forward is a seasoned FIFA 20 player, having previously beat Villa's Ezri Konsa in a charity game held between the two Midlands clubs.

This win sees Jota make it into the quarter-finals of the competition, facing Lys Mousset of Sheffield United.

Elsewhere in the tournament, John McGinn exited in the first round, losing to Brighton's Neal Maupay. Meanwhile, Trent Alexander-Arnold, Christian Atsu, Andre Gomes and Raheem Sterling have all booked their place in the quarter-finals.

yeah his career took a nose dive when he left the mighty Hibs, they never learn,
Top

Jota, a seasoned FIFA 20 player, beat Burnley's Dwight McNeil in the semi-finals before beating the Liverpool full-back with a golden goal victory.

The prize fund for the ePL Invitational is being donated to the #PlayersTogether initiative, created by Premier League players as a collective way of generating funds for the NHS.

Jota found himself a goal down to Liverpool in the encounter, but fought back valiantly to earn a 1-1 draw by the end of regular time.

The golden goal rule was utilised to find a winner, with Jota sealing the title 66 minutes into the extra period courtesy of a Raul Jimenez strike.

The win proves to be Jota's second notable success on the virtual pitch, having beat Villa's Ezri Konsa in a charity game set up earlier during lockdown.
Top